The town of Tryavna first became a regional centre as early as XVIII century although earlier records,

which indicate human settlement in Tryavna can be traced back to Thracian times. By the end of the 19th century, Tryavna had become the region’s main cultural and industrial centre and was heavily involved in the development of crafts during the Bulgarian Renaissance period.This resulted not only to economic prosperity, but also to the creation of theTryavna School - one Bulgaria’s oldest institutions of Art Tradition. Since that time, the work of Tryavna artists has become popular throughout the Ottoman Empire, Romania, Serbia and Russia.

Following Bulgaria’s independence in 1878, the Municipality started woolen textile manufacture and the first factory was opened in 1883. During the first half of the 20th C. a number of other types of industry were created, including the production of furniture, woodworking and textiles.The development of tourism started in the early 1920’s in Tryavna and Plachkovtsi and today there are a total of 1250 beds. Tryavna also enjoys a moderate and healthy climate, (cool summers and mild Springs) which resulted in a Sanatorium for Lung and Respiratory diseases being built in 1944.

The historical and architectural reservation in Tryavna is among its main attractions. Some of the best examples of buildings from the Bulgarian Renaissance period have been well preserved. The seven museum collections contain unique pieces of art from the late medieval period, such as icons and woodcarvings.The town of Tryavna has preserved its old town square, the only one left in the country, which has been proclaimed as a Monument of Architecture. 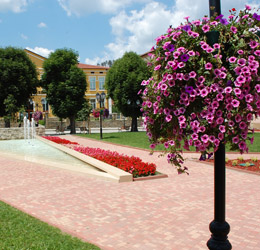